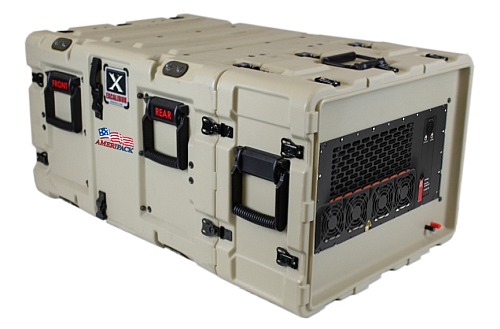 For many years it was the goal of electronics integrators to use Commercial-Off-the-Shelf (COTS) electronics in military systems.  Legacy systems using custom-built circuits that derived their security from the hardware itself and hardened for operating in extended temperature ranges and dusty environments were the norm for many decades.  The problem with these custom-built systems is the high development cost, and the difficulty of long-term supportability in an age where new commercial electronics systems are being developed annually.  As a relatively low volume consumer of high-end electronics, the military designers of Command, Control, Communications, Computers, Intelligence, Security, and Reconnaissance (C4ISR) systems needed a way to leverage the rapidly evolving advanced networking systems that are widely available in the marketplace into the military communications network.  The WIN-T program was tasked with the goal of enabling COTS electronics into the new mobile network.  The COTS electronics used at the nodes of these networks needed to be ruggedized for fielding in an austere environment where shock, vibration, extreme temperatures and Electro Magnetic Interference (EMI) protection was a necessity.  With much of this gear being rack mounted, a suitable enclosure and Environmental Control Unit (ECU) were needed to maintain a sealed environment while providing heating and cooling to maintain the electronics within the required operating range.  The previously available thermoelectric systems were heavy, very power hungry and large, obviating them from consideration for the program.  A new lighter, more efficient, small ECU based on vapor compression cooling was needed.

When the Army began developing the mobile network to enable every soldier to use a smart phone to transmit critical information from every corner of the Area of Responsibility, they needed to implement COTS solutions.  When the Warfighter Information Network -Tactical program was under development, General Dynamics, one of the major prime contractors came to Aspen to see if we could provide an efficient, lightweight ruggedized vapor compression based Environmental Control Unit to meet their requirements.  These ECU’s were required to maintain suitable operating temperatures in electronics enclosures housing the rack mounted servers and routers at the network nodes, provide EMI protection to the contents, and not emit EMI.  Engineers at Aspen Systems went to work and came up with the ECU- 550.  Working closely with the engineering and design team at General Dynamics, the Aspen team carried the project from conception through qualification and fielding.

Aspen Systems utilized its miniature vapor compression technology to develop and qualify a ruggedized miniature air conditioning system to meet the requirements of operation on a moving vehicle and in Operational Transit cases.  The completed system meets all relevant MIL Standards: 1) MIL STD 810, Environmental 2) MIL STD 1275, Power, 3) MIL STD 461, EMI.  The solution is 65% smaller, uses 75% less power, and weighs 80% less than the previously available competing thermoelectric systems.  The system was developed under a rigorous schedule to meet the customer’s tight timeline.  In production since 2010, and now with over 4000 units deployed on more than two dozen programs, the ECU-550 is now the new standard for cooling electronics enclosures.  It is now the cooling system of choice on several dozen programs with the Army, SOCOM, Navy, Marine Corps, and Air Force.