Aspen Systems provide a laser chiller as either a recirculating liquid chiller or by direct refrigerant cooling – also known as direct expansion cooling.

For a laser chiller with a liquid loop, we use our Liquid Chiller Module (LCM) which is a complete refrigeration circuit which includes our miniature rotary compressor, condenser, evaporator, expansion valve and drive board.  To that, a recirculating pump, fluid reservoir with tubing and fittings are used to connect to the laser cold plate.  The liquid chiller module is compact enough to integrate into a 4U rack mount laser controller as shown on our applications page for Digital Projection.

For Direct Refrigerant Cooling, the refrigerant flows directly through the laser cold plate eliminating the liquid loop components entirely.  This is highly desirable for applications that require the smallest size, highest reliability and no user maintenance.  Dominion Aesthetic have integrated Aspen’s DRC system into their new EON platform for body sculpting.  They use the Aspen system to not only cool the high power laser diodes but also the patient skin during the procedure.  Ekspla, a leading manufacturer of industrial lasers have used the Aspen DRC system to cool their new FemtoLux 30, a femtosecond laser system.  A description of the system can be found on our video page.

The trend of higher laser output power in increasingly smaller packages has many benefits in reducing the floor space requirements in production floor, cleanroom, medical operating room, clinics, and laboratory environments.  Laser product managers are seeing similar pressure to reduce the size of the external laser chiller while still offering improved cooling and energy efficiency.  Many OEM laser suppliers are adding the Aspen laser chiller based on our Liquid Chiller Module (LCM) or Direct Refrigerant Cooling (DRC) system into their laser system to form an integrated compact package.  It is important to make decisions early in the concept development of the product development cycle to ease integration of advanced cooling methods such as direct refrigerant cooling.

Table 1 lists virtually all the cooling methods used in modern laser systems.  Laser efficiency, laser temperature requirement, heat load, heat flux at the device, ambient air temperature, and facility infrastructure are determining factors in choosing a cooling system design.  For systems with low heat output and/or relatively high allowable temperature limits the above ambient systems shown in the top half of the table normally provide sufficient cooling.  For systems with more stringent temperature requirements where fans and pumped liquid loop systems are not adequate, then either vapor compression or thermoelectric systems are used to manage laser temperatures.  Both Thermoelectric (TEC) and Vapor Compression (VC) systems draw power to enhance the heat transfer from the laser to ambient air and enable cooling levels and heat fluxes not possible with passive means.

Thermoelectric coolers (TECs) use the Peltier effect in which a heat flux is generated at a junction of two dissimilar materials across which a DC electric current is passed.  As shown in Figure 2 TEC’s are constructed with P-Type, and N-Type semiconductors that are arranged parallel in the thermal path and in series along the electrical path.  When a voltage is applied across the device electrons carry heat to one side, making the other side cold.  As the heat load rises the amount of current required to maintain the correct temperature also must go up since the flow of electrical current is necessary to carry the additional heat load.  As a result, the efficiency of TEC devices is quite low.     As with all cooling systems, the heat removed from the device must be dissipated to the ultimate heat sink, normally to ambient air with a fan.  Typical coefficient of performance (cooling power divided by power draw) for a TEC device is in the range of 0.5 to 0.2, meaning that to provide 400 watts of cooling the TEC would need to draw between 800 and 2000 Watts of Power.

A primary benefit of the TEC is that it can be fabricated in a variety of configurations and made into small sizes for low power applications.  It also can provide precise temperature control.  Other than fans and pumps to which it is often attached, the TEC itself has no moving parts so it requires minimal service.  Ideal for small space, they can be used when typical refrigeration is not more advantageous.  The TEC assembly can be mounted directly onto the laser cold plate or used to chill a flowing liquid.  Due to its low efficiency, thermoelectric cooling is typically only used in applications requiring less than 400 watts of cooling.  For applications that require a high level of temperature stability, a systems engineer can consider a hybrid approach of using vapor compression for the bulk of the cooling power and a small TEC assembly for a high degree of regulation.

Vapor compression cycle refrigeration is a process which the physical properties of a refrigerant are exploited to realize isothermal, 2-Phase heat transfer to efficiently provide cooling.    As shown in Figure 3, heat is absorbed from the source being cooled in the evaporator where a refrigerant absorbs heat as it is converted from a liquid to a gas.  The compressor takes in the gas discharge from the evaporator and raises its pressure and temperature.  The condenser, takes in this superheated gas and condenses it from a gas to a liquid as heat is dissipated to the outside environment.   In some cases, the condenser is designed to dissipate heat to a closed loop liquid line that is part of the manufacturing facility.  The expansion valve takes in the high temperature liquid refrigerant and lowers its pressure and temperature.    This low pressure and temperature gas/liquid mixture, then flows into the evaporator, repeating the cycle. The components in the basic refrigeration system are the Compressor, Condenser, Expansion Valve, and Evaporator. Simply stated, refrigeration systems efficiently move heat from a cold source to a heat sink. Vapor compression refrigeration systems are very efficient, with a typical coefficient of performance between 1.0 and 2.5, meaning that for a 400-Watt heat load the power draw would typically be between 400 and 160 Watts.  This is 1600 to 640 Watts less then equivalent TEC systems as shown in figure 1. 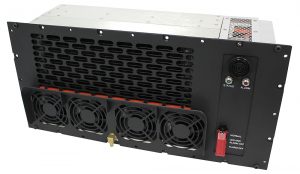 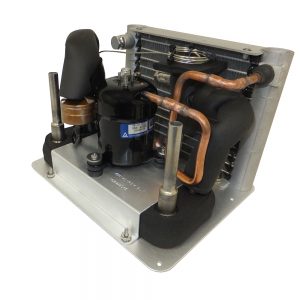 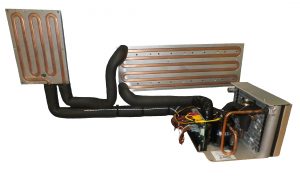 Compressor based liquid chillers are the most widely used cooling technique for high power lasers.  Compressor size can be specified for cooling power from approximately 100 Watts to greater than 10kW and can cool virtually any laser type.

In 2007 a small rotary compressor was first introduced and put into communications systems for cooling military electronics.3  The compressor shown in Figure 5 uses standard rolling piston technology that has been miniaturized and coupled with an efficient brushless DC motor.  With a speed variability between 2500 and 6500 RPM the compressor can effectively load match to the desired temperature.

Regardless of the cooling technique water to air, water to water, TEC or vapor compression, liquid recirculation requires a mechanical pump, reservoir, tubing and fittings.  With the vast improvement of laser reliability, the liquid cooler is seen as the weakest link in the system.  Pump and fittings are known to fail and leaks around electronics can cause a laser failure.  Fluid levels in these systems need to be monitored and occasionally refilled due to evaporation.  In addition, it is recommended that an algaecide be used to prevent biofouling of the recirculating liquid line. Pump selection is critical to ensure proper flow rate and pressure for the intended application and prices can vary wildly from a few tens to over $1000 depending on the quality of construction.  A common thread heard from laser manufacturers is that an end user, whom may have spent $100k or more on a laser, will purchase an untested low-cost chiller to save a few hundred dollars.  When these chiller systems lose effectiveness or fail, they can cause down time for the user and warranty issues for the laser supplier.  Another common complaint from the laser users is that the chillers are unreliable and difficult to maintain.  Although the liquid chiller is the most common approach to cooling lasers, this type of feedback highlights an opportunity for improvement.

An exciting new development being explored by some of the leading laser manufacturers is direct expansion cooling.  Here, the refrigerant flows directly through the cold plate with the circulation being driven by the compressor.  The advantages are multifold.  This method eliminates the need for a liquid recirculating pump, fluid reservoir and associated tubing and connectors – sources of failures and leaks.  The efficiency is improved by removing the losses associated with cooling a liquid and energy savings of driving a pump (8 times less vs. TEC, 2 times less vs. liquid chiller – Figure 1.  As shown in Figure 6, the cooling capacity for direct refrigerant is 25% greater than a liquid chiller at a 25 degrees C.  The system is simplified improving reliability (MTBF >80,000 hours) and further reduces the size of the cooling system.

Three design issues need to be addressed when using direct refrigerant cooling.  These are, vibration from the compressor which may adversely affect the beam pointing stability, a reliable means of decoupling the cooling circuit from the laser for laser or cooling system maintenance without loss of the refrigerant, and attaining sufficient control of the laser temperature tolerances.  In a typical direct expansion cooling system copper tubing is rigidly connected from the compressor to the cold plate allowing vibration to transmit along these lines.  One way of addressing this is the use of flexible refrigerant lines that can decouple the compressor vibration from the laser.

Enhanced control over the laser temperature can be attained by coupling the laser controls directly to the refrigeration system controls.  In this manner, any thermal lag in the direct refrigerant system can be overcome by the control system.  This degree of controls integration is not necessary with the much larger liquid chiller systems since they often use the fluid reservoir and its innate heat capacity to maintain tight thermal control. 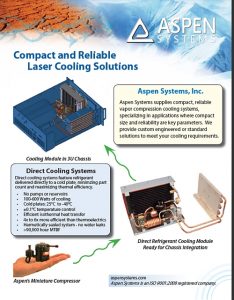