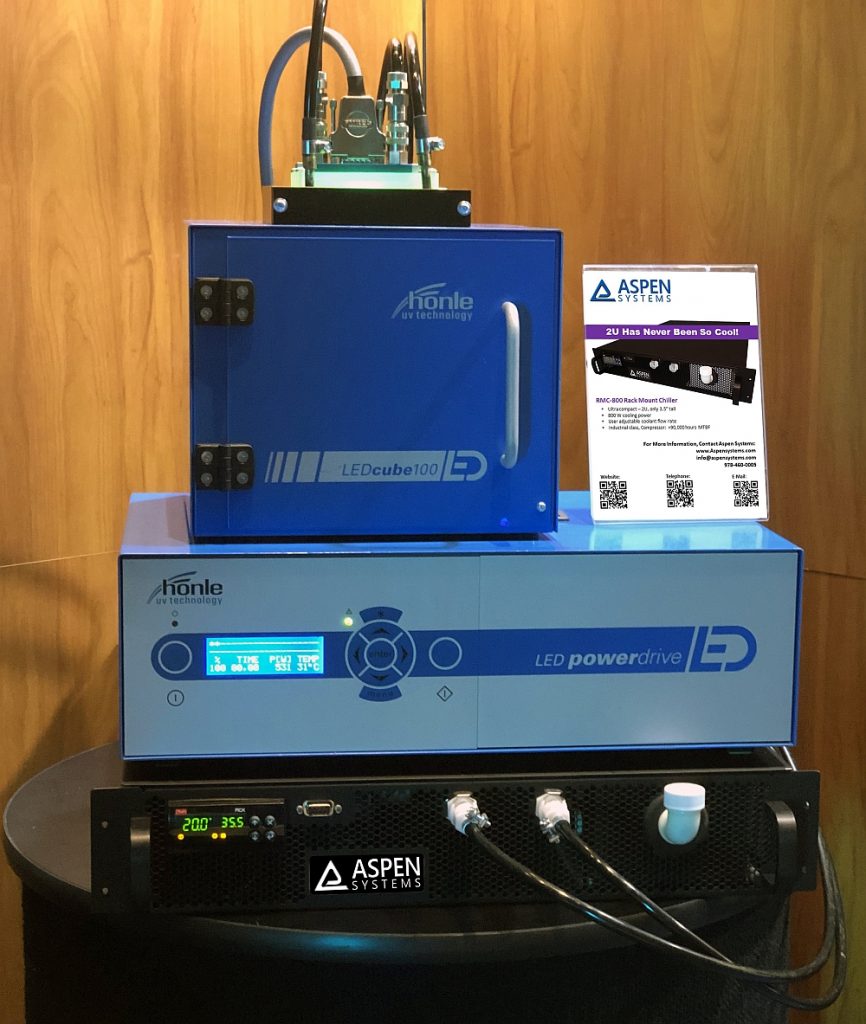 Honle UV, http://www.honleuv.com/ successfully demonstrated the use of Aspen Systems’ RMC-800, ultra-compact rack mount liquid chiller system.  The LCS series is based on Aspen’s vapor compression technology using the world’s smallest compressor.  It shares many of the advantages UV LEDs including small size, high efficiency and the chiller is powered by 24 Vdc making it ideal for mobile applications.

According to Deivis Parejo – Business Development Manager at Honle UV America, Inc. “The Aspen RMC-800 is ideal for use with our LED Powerline series.  The chiller is less than one quarter the size and less than one eighth the weight of more conventional chillers”.

Why UV LEDs for curing applications?

In conventional lighting, visible LEDs (Light Emitting Diodes) are seeing explosive growth in a variety of applications driven by low power consumption, long life and environmentally friendly materials used in their construction.  According to the US Department of Energy from 2010-2030 the cumulative energy savings are estimated to total approximately 1,488 terawatt-hours, representing $120 billion at today’s energy prices, and would reduce greenhouse gas emissions by 246 million metric tons of carbon.

UV-LEDs are also seeing ever increasing adoption in curing applications for many of the same reasons – high efficiency, greater than 10,000 hours lifetime, green technology with no mercury disposal issues, no ozone production and no volatile solvents.  Additionally, with optimized formulations of inks and adhesives, cure quality and durability have been found to be superior.  Early adopters of UV LEDs have shown a long term commitment to environmental and energy concerns.

What is unique about LEDs?

LEDs are considered a solid state device and are often referred to as solid state lighting or SSL. The manufacturing process is much like that used for making computer chips — one hundred or more thin layers of semiconductor materials are deposited that when energized — emit light.  For high power LEDs, Aluminum Gallium Nitride (AlGaN) is the material of choice.  The LED chip is quite small ~1mm (Figure 1), in comparison to the packaging, which includes the electrical connections, heat sink and lens.

The light output of LEDs is much closer to that of lasers regarding wavelength in that they are monochromatic, emitting at a single wavelength.  In contrast, a mercury halide lamp emits discrete wavelengths ranging from the short ultraviolet (UV) through the visible to the infrared (IR).  In contrast, the wavelength of an LED is determined during its production.  Adding more aluminum to the semiconductor mix creates shorter wavelength LEDs.  As such, the LED wavelength must be specified to match the material being cured.

Are there any issues with using LEDs in UV curing applications?

In a wide range of applications, UV LEDs have demonstrated numerous advantages.  As with any new disruptive technology, a few considerations need to be taken into account.  Although the initial capital costs are higher than traditional lamps, the return on investment can be substantial.

The single wavelength of LEDs requires photo-initiators with a peak sensitivity to the LED source.  Nevertheless, the formulators have acknowledged that LEDs are the source of choice going forward and have released products optimized for LED activation.  Lastly, commercially reliable UV LEDs are currently limited to a minimum wavelength of 365nm and as such not viable for ultra-short wavelength applications.  However, forecasts show that by the middle of the decade suitable LEDs will be available.

What are the advantages of LEDs in UV curing applications?

Aspen Systems, Inc. (ASI) was founded in 1984 as an innovator in materials research and vapor compression refrigeration.  Initial work in refrigeration was funded by the SBIR program to develop compact cooling systems for soldier cooling in harsh environments.  Subsequently, Aspen commercialized the world’s smallest compressor and developed air cooling systems for the use in controlling the temperature of US Army’s communication electronics in the transit cases as part of the Warfighter Information Network-Tactical (WIN-T) program.

Over 3,000 systems have been deployed in Afghanistan, Iraq and around the world in the electronics cabinets of HUMVEEs and Mine-Resistant Ambush Protected (MRAP) vehicles.  Additionally, liquid chillers and direct refrigerant systems from Aspen can be found in some of the leading OEM suppliers of medical devices, laser systems and scientific instruments.

Honle is a leading supplier of industrial UV/LED technologies.  Their UV/LED equipment is used in many production processes and in a variety of application:

– Drying of UV/LED coatings, inks and lacquers in the inkjet, offset and flexo printing industry

– Curing of UV/LED coatings and adhesives and in medical device manufacturing, optical, electronic and automotive industries.

– Surface disinfection in the pharmaceutical, food and cosmetics industries.