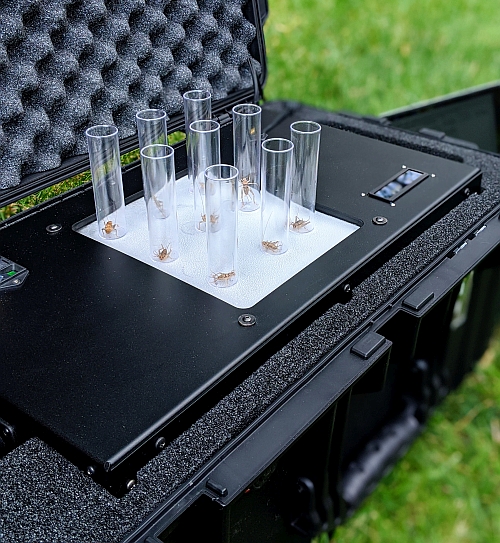 IoTherm is a start-up company that specializes in temperature control systems that can be transported and used at remote field sites but also has the performance and functionality to be a key contributor to any lab doing temperature experiments.  We were able to sit down with founder and president, Kennan Oyen, for an interview.

Why is the study of bumble bees important?

Recent data suggests that various populations of bumble bees are in decline. According to Dr. Kennan Oyen, researcher at the University of Cincinnati and founder of Iotherm, “This is likely due to temperature changes throughout their native regions and the bees are moving to new areas or failing to maintain populations where they once were found. To understand the role of temperature in bumble bee population dynamics, we tested over 3,000 workers and discovered that they varied in their ability to tolerate extreme temperatures. In colder climates, bumble bees had lower thermal tolerance thresholds than those from warmer sites.”  Oyen added, “These physiological data suggest that declines may in part be due to a mismatch between thermal tolerance limits and environmental temperatures in their historic ranges. These data also provide a means for mechanism-based predictions about the future ranges and distributions of these critical pollinators.”

Oyen noted that the field of organismal biology has increased in the last 10-15 years, particularly as it relates to the influence of temperature variation on biological systems. As environmental temperatures continue to change, pollinators, disease vectors, and other organisms are responding to these changes. Therefore, a better understanding of how temperature directly influences organisms may help predict declines in beneficial insects, the spread of vector-borne diseases, or other major shifts in biological systems. Oyen founded IoTherm to address the need to take portable temperature controllers into the field and measure what is called thermal tolerance limits (the hottest and coldest temperatures that organisms can endure). These limits can help researchers predict how an animal will respond to changes in climate, or whether plants or animals will be able to shift their geographic ranges to new environments.

The problem and the solution 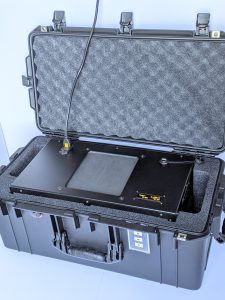 The study of temperature on organisms has been hampered by not having portable precision equipment that can be brought to the organism. Historically, researchers had two options for laboratory analysis of thermal tolerance limits, 1) collecting organisms in the field and shipping them to the lab or 2) raising them in the lab, which affects how quickly data can be collected and data quality.  IoTherm’s goal was to develop a field deployable system that was rugged, lightweight, and with high precision.

“The ability to precisely regulate temperature in the field…will really change the landscape of field biology [leading to] tools needed to collect precision measurements in any environment.  We wanted to create a design that would be useful for folks working in the most extreme environments, even in Arctic and Antarctic systems, so we set our design goal at -40°C.  Until we collaborated with Aspen Systems, the best we could accomplish was -10°C.”, Oyen said.

Oyen concluded, “Aspen is really the heart and soul of our system. And without it, we would not be able to achieve the kind of cooling power that we really needed. That has been absolutely crucial for us and for our business. I need to say too that the support we’ve received has been incredible.” She added, “Temperature influences all biological processes. As a field biologist, we need this sort of unit. I can foresee a lot of implications for it as a medical device that can precisely regulate temperature, such as transporting vaccines or running diagnostic tests in the field.” Oyen and others believe it is possible to expect additional tools to be designed that are lightweight, portable, rugged, and flexible, allowing these critical tests to be run on site.