In early 2008, shortly after the Aspen miniature compressor had transitioned into production, Aspen Systems identified the Warfighter Information Network-Tactical (WIN-T) as a potential customer for miniature refrigeration systems. The WIN-T program is tasked with fielding the Army’s mobile network. A significant portion of the mobile network consists of rack mounted Commercial-Off-the-Shelf (COTS) electronics equipment mounted to all terrain vehicles. These rack mounted systems require protection from sand, dust, and the heat often encountered by the Army. Aspen contacted one of the prime contractors on the WIN-T program and through a series of communications and meetings developed the concept for what is now the ECU-Chill 550 Environmental Control System (ECU). On the initial effort with the prime contractor, Aspen developed a prototype thermal demonstrator and established that the cooling capacity would be sufficient for the requirements of the WIN-T program. 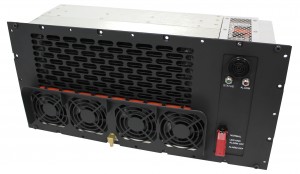 In addition to the effort with the prime contractor, Aspen was awarded Small Business Innovation Research (SBIR) Phase I and Phase II programs for the development of the miniature environmental control system. By combining the SBIR and Prime contractor efforts, Aspen developed the ECU-Chill 550 system into a MIL qualified ECU for operation in operational transit cases and on moving vehicles. By the end of the Phase II program Aspen was meeting low rate initial production requirements. For the Army’s perspective on this successful transition of technology to meet mission requirements, see the  2011 Army SBIR Commercialization Report.

To date, Aspen has built and shipped over 1600 ECUs into the field. Click here for the ECU-Chill 550 product page.